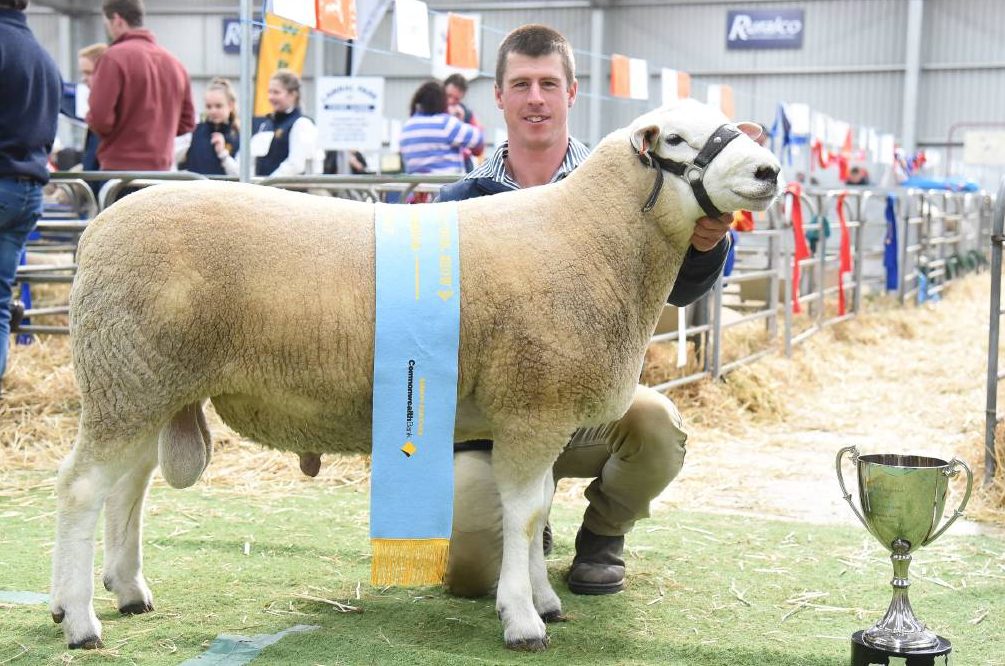 Published by Stock and Land – link to original article

The Jorgensen family’s Wimmera-based Mertex Texel stud, Antwerp, went home with smiles after taking out the major ribbons for the breed at this year’s Australian Sheep & Wool Show in Bendigo. “We had pretty high hopes for both the ewe and ram coming in,” Tim Jorgensen said.

The stud brought 12 animals to the show and took home champion ram, champion ewe and supreme exhibit with the ram. The 150-strong stud ewe flock was established in 1996 with the purchase of 10 ewes from the Australian Texel Corporation.

Mr Jorgensen said they had added ewes from dispersal sales as well as the purchase of a ram from New Zealand. The supreme ram had a deep pedigree on both the paternal and maternal sides with success at the ASWS . Mr Jorgensen said this was the first show for the young ram and would now go on to Sheepvention in Hamilton and then Adelaide and Geelong. “This is only the start for him,” he said. He said the 13-month-old champion ewe was “probably the best we have eve bred”.

She’s an exceptional ewe. She’s AI bred by a sire that was champion at Bendigo in 2003 – so some of our older genetics,” he said.

Texel judge Don Cochrane, Western Australia, said his focus was on economic factors, particularly muscle and feet. “The sheep must have the ability to be mobile – they must have good feet and good structure,” he said. He concentrated on his “five T’s – toes, teeth, testicles, teats and type. Mr Cochrane said the sheep presented, particularly the younger sheep, had good foot structure and walked “very well”. The traditional Texel could be excessively muscled and not as athletic as today’s sheep, he said. He said this year’s champion ram was an outstanding animal that was an “Australian Texel” – well structured and muscled but also athletic. Selecting the ram over the ewe for supreme exhibit, Mr Cochrane said both would make great contributions to the breed. The ram came from the two-tooth class in the wool.

The reserve champion ram was shown by Ashley Smith’s Cypress Park stud, Windermere. Mr Cochrane said it was important that breeders embraced modern technology but also ensured the animals could still walk to get around. Mr Cochrane said the champion ewe was a “great example of the breed”. “It was a really difficult decision but the ewe has excellent width of loin and walks extremely well,” he said. The ewe came from a class for sheep in the wool. Mr Cochrane said he found it more difficult to judge ewes “with their clothes on” preferring to judge them shorn.

The reserve champion ewe was also an entry from Mertex from the shorn class, ewes showing milk teeth only.