In his own words, Tim Jorgensen “lives and breathes” sheep and this passion benefits his family’s stud and commercial sheep operations.

Along with parents Basil and Heather and siblings Samantha and Nathan the Mertex stud was founded in 1996 at Antwerp, with the purchase of 10 Texel ewes from the Australian Texel Corporation. They then bought another seven ewes and a stud ram in 1997 when the Texel Corporation sold out and since then have slowly built up numbers and bought ewes from other studs. 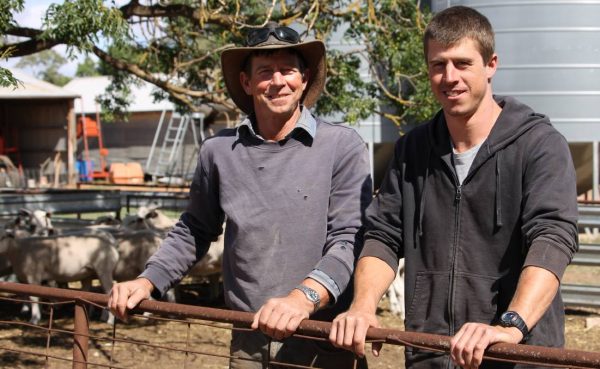 Tim and Basil said it was getting harder to secure new genetics, particularly as the family has sold stud rams to other studs. In 2012 the family bought a Texel ram from New Zealand. They have done several AI programs and did an ET program in 2004, 2009, 2012 and more recently this year in both breeds. 2012 was also the year they registered the Mertex White Suffolk stud.

They also sell cross-bred rams, such as Texel-White Suffolk and Texel-East Friesian. At Mertex, the Jorgensens are breeding for high yielding carcases and good, structurally sound sheep. The Texels’ black feet also make them hardier and resistant to foot rot especially in higher rainfall areas.

The family is continuously improving both stud breeds – with the Texels they select to keep their valuable meat attributes and gradually making them longer; and with the White Suffolks they are working to retain the broad and meaty traits of their foundation stock, while refining to a more White Suffolk face. They have 450 stud ewes across two breeds, which are run on the home property at Antwerp.

The Jorgensens use Texel rams as the terminal sire over their 3500-4000 self replacing composite commercial ewes, which are run at Charam and Miga Lake. Basil said Tim’s passion for sheep was evident from as soon as he could walk. Tim added that while the family had studs, it wasn’t until he was about 15, when the family started leasing some country in areas better suited to sheep, that they had a larger commercial operation. As he’s got older, Tim has bought land towards Edenhope to run more commercial sheep for prime lamb production. He likes being able to use Mertex Rams to know how they perform for commercial clients. Tim enjoys working with sheep and likes to see the improvements they make in them every year.

In a commercial operation, he said sheep were a great risk management tool because even in drought when producers have to buy feed in, they still had something to sell whereas crops can come to nothing if it doesn’t rain. While they use LambPlan as a tool, Tim said he preferred to breed and pick sheep on correctness, visual assessment and raw data. Basil said they sold the commercial Texel sired lambs over the hooks because in saleyards, such breeding sold well, but they were not paid for their high meat yield. “They [processors] work on 47-48 per cent dressed weight for most of your breeds where Texels, we’ve been up to 56-58pc,” Basil said. “Processors say to us, ‘Why can’t we get more lambs like this?’”

Tim said Texels were shorter in the leg compared to some other breeds, so could look smaller but still weighed about the same and were more solid, so yielded better. Tim said it was terrific to be getting more repeat clients. In the past three years, they have sold all of the White Suffolk Rams and Texel X Rams, already having ram orders for this year.

The Mertex White Suffolk stud started with ewes from Detpa Grove and Burwood stud. The family has since bought ewes from Wheetelande and has been using sires from Detpa Grove, Rene, Wattle Park and Wingamin, both through AI and the purchase of one of their older rams. Carcase traits are also the focus in the Mertex White Suffolk Stud. The Jorgensens are familiar faces at Victoria’s big sheep shows, and they’ve won many broad ribbons and interbreed champions. They said shows were an opportunity to benchmark their sheep and display them to potential clients. They sell many rams to producers locally and to the Edenhope area, as well as to Ballarat, Hamilton and towards Geelong.

The father and son said they had entered Mertex Texel and White Suffolk stud in the inaugural Stock & Land Sheep Week for another way to promote their studs, which allowed people to see more of the flocks beyond their show team.