Mertex Texel & White Suffolk Studs from Antwerp, had an extremely successful showing at the Australian Sheep & Wool Show in Bendigo. The Jorgensen Family dominated the senior ram classes in the White Suffolk section on Friday with a first placing in the April, May & June classes and second & third in the wooly ram class. Their April Drop Ram 16/306 who weighed 136 kilograms and had an impressive 50mm eye muscle depth was sashed Senior Champion Ram, Grand Champion Ram and Supreme White Suffolk Exhibit for the Australian Sheep & Wool Show. Judge Anthony Hurst, Seriston, Avenue Range, was impressed by the rams exceptional hindquarter muscling, tremendous topline and balance. Mr Hurst was looking for sheep with structural correctness and red meat yield which he found with the Mertex sheep. 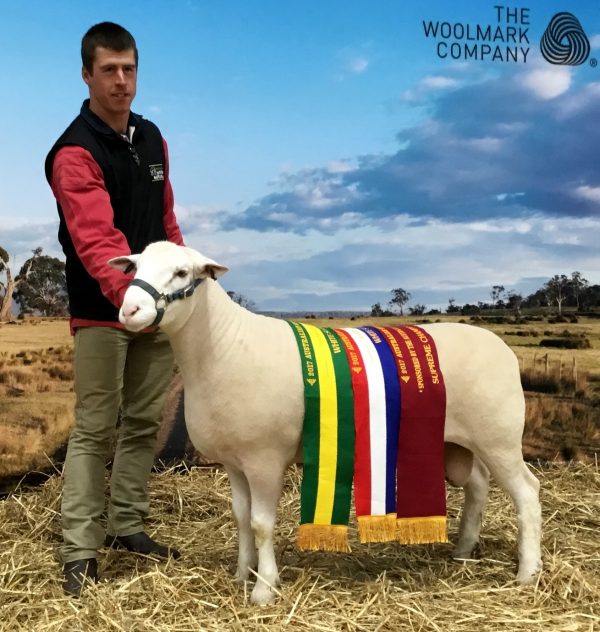 In the ewe section Mertex was awarded first in the pair of Ewes followed by first with their Sires Progeny Group and Group of one ram & two ewes. “Such success at a major show after only breeding White Suffolks for 5 years is a huge achievement and assures us we are heading in the right direction with our breeding. Focusing on the individual animals structure, muscle development and growth”.

In the Texel Judging on Saturday Mertex took out Reserve Champion Ram & Ewe along with firsts in the Sires Progeny, milk tooth ram and ewe classes and two tooth wooly ram and ewe classes. Mertex was also awarded Most Successful Exhibitor in the Texel section. Judge Graham Day of Bordertown was also impressed by the Mertex Sheeps structural correctness and meaty attributes. Mertex exhibited 27 sheep in total with 12 White Suffolks and 15 Texels.

Mertex will be Showing their sheep again at next weeks at Hamilton Sheepvention then in September at the Adelaide Royal and the White Suffolk Elite Show & Sale in Bendigo, Finishing off with the Geelong Royal Show in October. Mertex’s Flock Rams will be available for private sale in September.